Traveling to Iran is much less difficult, complicated and expensive than how you might think! Amazing travel programs are available on fixed dates or on an individual basis: cultural and historical tours, adventure travels on deserts and or mountains, summer or winter trekkings, geo and eco tourism trips.

We offer already structured, well-prepared and fascinating travel programs, like the irrenouncable visit of major historical and artistic sites of Iran.

Here are the most successful programs we suggest for art and history lovers:

A trip to the most important sites for an exhaustive meeting of the artistic and historical beauties of a world whose foundation has been at the dawn of civilization.

A trip along the Silk Road, among gardens, fortifications, caravanserai up to the Lut desert, and then all major historical sites and towns.  13 Unesco sites.

A complete tour that allows to cross the big Iran from North West to South, to see different culture footprints, a varied nature, pre-islamic and islamic architectures.

Below a few curiosities about persian history and culture:

Caravanserai: a place where cultures meet - The word caravanserai is a persian word, combining “caravan” with “sarayi” or “serai”, meaning palace, dwelling or enclosed court.

The Gate of All Lands - The ruins of Persepolis, symbol of Persian might at its zenith, rise starkly today from a plain in southern Iran, set on a walled terrace

Persepolis, a Greek name - 2.500 years after it was built, the ruines of Persepoli site, the greatest and impressive persian Achaemenid kings residence,

Ferdowsi and the Book of Kings - During the Samanid era (874-998 A.C) and the Ghaznavid dinasty, the courts were graced wih the genius of the world famous poet Ferdowsi,

The greatest empire of ancient times - In less than 70 years, beginning around 560 B.C. Persia’s Achaemenid Kings brought together all the disparate nations of the ancient Middle East

The world first postal service of Darius the Great - To ensure the control and development of his immense empire, the persian Achaemenid King Darius the Great connected his cities by means of a network of stone-paved roads

The first charter of liberty of nations - “I am Cyrus, king of the world, great King, mighty King, King of Babylon, King of the Land of Sumer and Akkad, King of the four quarters,

The legend of Cyrus birth - An ancient legend tells that Ikhtovigo, king of Medes, has a beautiful daughter, Mandana. One night the king dreamed that

Jewelry and cult - For thousands of years the jewelry in Central Asia was inseparable from rites and cult practices.

The dome, a persian inheritance - The dome has been vital to the development of Persia’s great architectural achievements, as well as to world future architecture.

The symbolic geometry of persian gardens - The symbol of the digit 4, representing the four sacred elements, fire, air, water and land, has very old origins.

The Gate of All Lands - The ruins of Persepolis, symbol of Persian might at its zenith, rise starkly today from a plain in southern Iran, set on a walled terrace

The grandeur of Isfahan architecture - Shah Abbas I (1589-1627) was the Safavid dinasty shah who designated Isfahan as capital. He reconstituted it with so many new mosques, palaces,

PICS OF THE MONTH 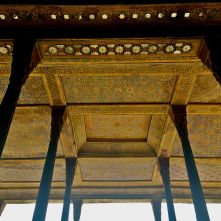 TRANSLATE IN YOUR NATIVE LANGUAGE